Past Q & A Sessions

Have a question pertaining to the Hearing Conservation Standard? Unsure about the results of an audiogram? Need an outside opinion regarding OSHA recordability or work-relatedness of a standard threshold shift? Click here and ask Dr. Tom Cameron, CCC-A, Director of EI’s Hearing Conservation Programs!

Dr. Cameron is a licensed and certified Audiologist with over twenty-seven years of clinical, administrative, industrial and teaching experience. He is a member of the National Hearing Conservation Association, the American Academy of Audiolgy, the American Speech-Language-Hearing Association and a Past President of the North Carolina Speech, Hearing, and Language Association.

Q: Sometimes it seems that a number of successive STSs occur for some of our employees without the baseline being revised. Why does that happen? I thought that the baseline changes whenever a confirmed STS occurs?

A: Good question! It sounds like you’re paying close attention to the quality of your audiometric data and to the analyses performed by AudioAssessor®. I hope you’ll continue doing that! Let’s see if I can help you understand better why and how baselines change.

AudioAssessor®, like all successful audiogram analysis systems, follows OSHA guidelines about when to revise baseline audiograms. OSHA’s basic philosophy is this: (1) they don’t want baselines changed easily or often – or for frivolous reasons, and (2) they leave the final determination of when and how to revise a baseline up to the supervising audiologist or physician – within certain specified limits. With that in mind, let’s see what those limits are.

The OSHA noise standard specifies two cases when a baseline can be changed for an employee: (1) whenever a persistent standard threshold shift (STS) occurs, and (2) whenever a persistent improvement occurs. That’s all OSHA specifies about when to revise a baseline, but what about how to do it? OSHA doesn’t say much about this, except that they want separate baselines to be maintained for each ear. They leave the question of how to revise a baseline up to the supervising hearing professional. Most audiologists (and many physicians as well) have elected to follow the recommended guideline of the National Hearing Conservation Association (NHCA) about what a persistent STS is and how to revise baselines for it. It seems like a reasonable guideline, and EI, too, has elected to follow it. Here it is: according to the NHCA, a persistent STS occurs whenever two successive tests show an STS and the test date of the second STS is more than six months later than the date of the first test showing an STS. 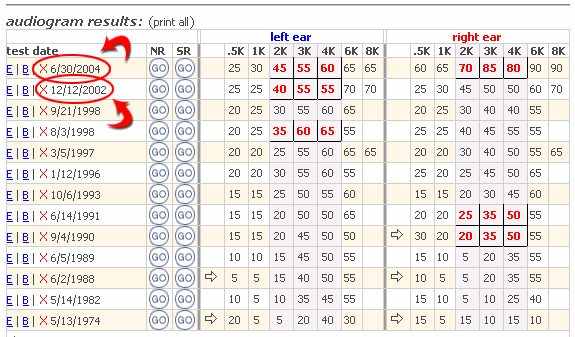 Whenever that happens, the employee’s baseline will be revised to the test date of the first-occurring STS in that pair. Please note, however, that the baseline revision will not be immediately apparent on the audiogram history list after the STS has been confirmed by the second audiogram. This is because the second, confirmatory audiogram still must be compared to the original baseline in order to show the second shift, upon which the determination of persistency is based. This concept sometimes seems fuzzy or strange to folks, but it’s an essential part of the whole process! The new baseline will, however, be noted on the audiogram history list when the next audiogram is performed.


So that’s how AudioAssessor® revises baseline audiograms. Note that, because of the 6-month “lag-time” in the process and the fact that many folks perform a retest within 30 days of the initial STS (allowed by OSHA before having to record an STS on OSHA Form 300), often you’ll see three STSs occurring in a row without any sign of the baseline’s being revised! But rest assured that, if the third STS audiogram date is more than six months later than either the first or second STS audiogram date, the baseline has been revised in AudioAssessor®, and the little arrow indicating a new baseline will appear in the proper place on the audiogram history list when you next perform an audiogram.

Any more questions about how baselines are revised? No, I think that makes sense, although it sounds pretty complicated. Q: But what I do need to know is what I should do about recording all of these STSs on the OSHA log. I know that the first one goes on the log, and that the second one (the 30-day retest) simply confirms that for me, but what about the third STS? Does it have to be recorded, too?

A: Another great question! And it has an easy answer: NO – as long as you recorded the first STS. If for some reason you didn’t, you'd better have a pretty good reason for not having recorded it (e.g., the employee’s TWA is below 85 dBA or you have a hearing professional's written determination that the STS wasn’t work-related). But, if you did record that first STS, then you don’t have to record the second or third one, even if (as will usually be the case) it was done in the following year. You only have to record one STS that occurs for any given baseline test. Of course, once the baseline date changes (as it will when this second or third STS occurs more than six months after the first STS), then any successive tests that show an STS (calculated from the revised baseline) will be considered new OSHA illness occurrences and must be recorded on your OSHA log.

Please note that AudioAssessor® cannot tell you with certainty whether that second or third STS (from the original baseline) needs to be recorded or not, because it has no way of knowing whether or not you recorded the initial STS! (AudioAssessor® doesn’t maintain your OSHA Form 300 for you.) All AudioAssessor® can do is list both the second and the third STS tests for you on its Possibly-Recordable STS list, since they are both “confirming STSs.” You must make your own determination of recordability, based on whether or not (1) you recorded an STS from the same baseline in a prior year and (2) the new test meets OSHA guidelines for recordability (see the previous paragraph).

I hope this information is helpful for you as you work with your audiogram program. But, if you still have questions, or if something unusual comes up and you’re unsure if the program is working as it should or if an STS should be recorded on the OSHA log or not, please give me a call (919-657-7500, ext 255) or email me at tcameron@ei1.com. I look forward to hearing from you.

Q: Dear Dr. Tom:
A hearing test on one of our employees showed an STS and a low frequency hearing loss in both ears. The report generated by the AudioAssessor program suggested that she be seen by a physician, and her doctor told her she had otosclerosis. What is otosclerosis? Is it something caused by workplace noise?

A: Otosclerosis is a disease which may result in a fairly significant conductive hearing loss. However, it is not painful or contagious, and is not related to noise exposure in any way.

Otosclerosis is an abnormal growth of new bone tissue in the otic capsule, which is the bone surrounding the inner ear. In the early stages, this new bone tissue is soft and spongy, leading some people to refer to the disease as otospongeosis, but eventually this spongy bone will condense into a hard, sclerotic mass.

You remember, of course, that the ear serves to transform air pressure variations into mechanical energy and then to electrical impulses which we interpret as sound. Air pressure variations associated with sound are directed down the ear canal causing the eardrum to vibrate. These vibrations are then transmitted along the ossicular chain (consisting of the malleus, incus and stapes) and then, by the motion of the stapedial footplate, through the oval window into the cochlea, where they are converted yet again, first into fluid motion and then to electrical impulses which travel by means of the auditory nerve to the brain for appropriate interpretation. 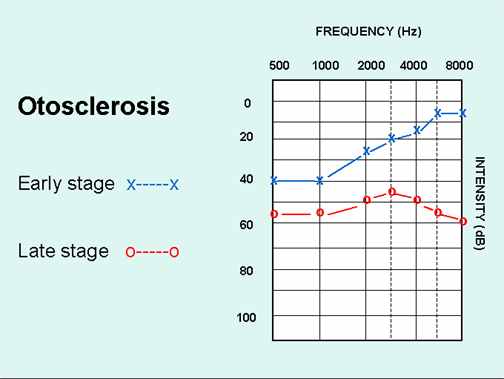 Abnormal otosclerotic bone may occur anywhere within the otic capsule. If it forms around the footplate of the stapes, however, the stapes is no longer able to move freely in the oval window. This stapedial fixation reduces the amount of mechanical vibratory energy transmitted into the cochlea, resulting in a slowly progressive conductive hearing loss frequently affecting both ears. In the early stages, the hearing loss shows a generally rising pattern with more loss in the lower frequencies than the higher. As stapedial fixation increases, however, the higher frequencies become more involved and the overall audiometric configuration flattens out with a maximum conductive loss of around 60 dB.

Most cases of otosclerosis are thought to be inherited. The disease may develop at any time in the period between mid-teens and middle age, but most typically it is first noted in the early 20s. It is thought that up to 10% of the adult population in the US may be affected, although stapedial footplate fixation and associated hearing loss occurs less frequently, perhaps affecting around 1% of American males and 2 to 3% of American females. It is most frequently seen in Caucasians and is uncommon in Native Americans or African- and Asian-Americans. There also appears to be a relationship between otosclerosis and pregnancy, with pregnant women sometimes showing marked reductions in hearing acuity.

Besides the gradual hearing loss, symptoms of the disease may include tinnitus and dizziness or balance problems. Medical evaluation is, of course, strongly recommended. Treatment options may include use of hearing aids or surgery. Since in many cases the sensory cells in the cochlea are intact, hearing aids are often quite helpful in cases of otosclerosis. Surgical procedures such as stapedectomy or stapedotomy, which use tiny prosthetic devices to bypass the otosclerotic bone, are nowadays routinely performed with typically excellent outcome.

Employees with otosclerosis should continue in the company hearing conservation programs if eligible by virtue of their workplace noise levels. They should, of course, also continue with regular audiological and medical evaluations as recommended by their physicians.